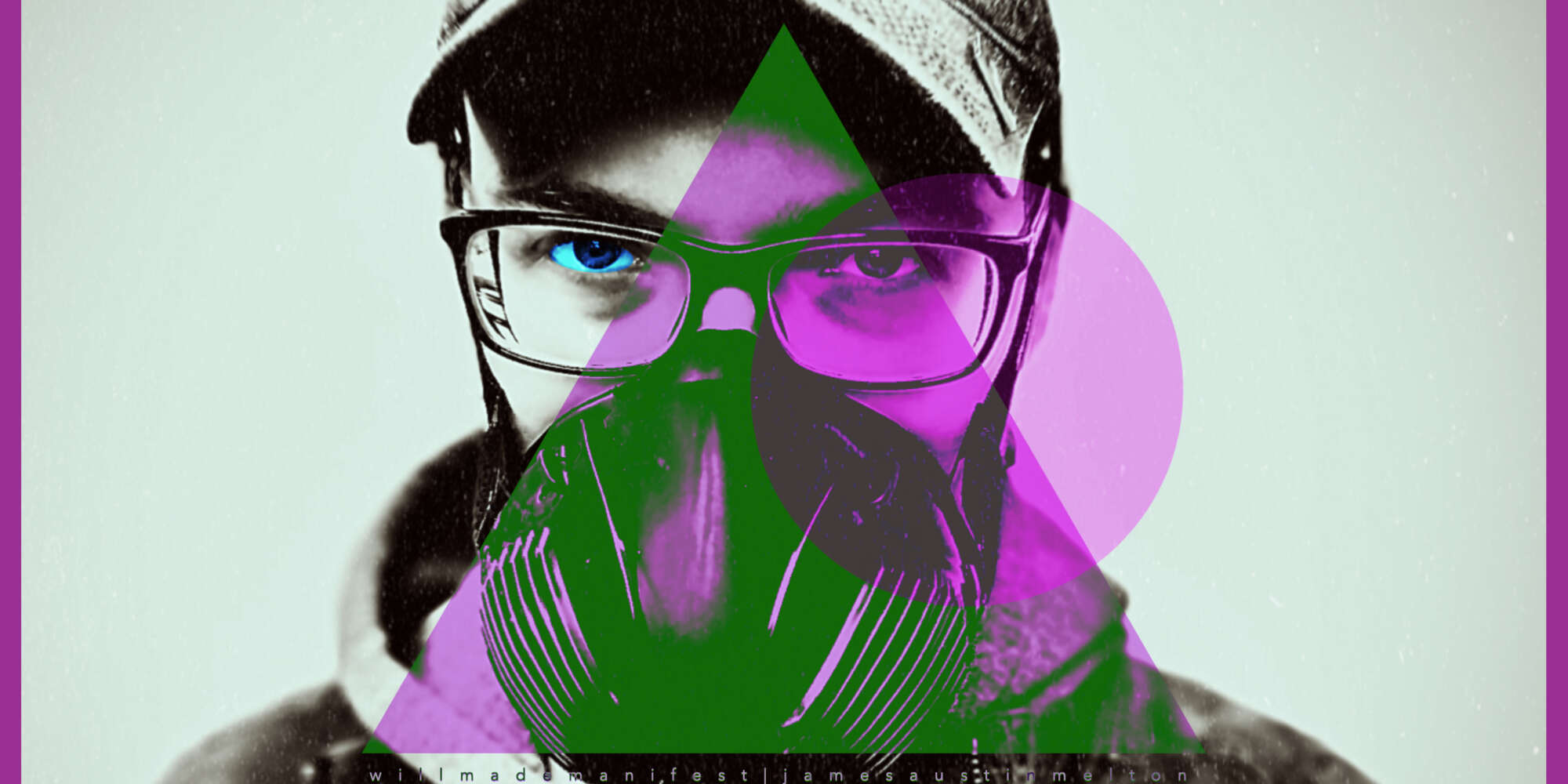 I have always used music as a way to cope with stress and anxiety. I really love falling into “flow” when writing, producing, or playing. The psychological state of flow is the closest thing to nirvana or heaven that I’ve ever experienced. Growing up I always had a keyboard, guitar, or my voice to lose myself in.

Though I didn’t study music academically until I came to UArts, I have always been musical. I could drop a strange Dungeons and Dragons reference to the difference between wizards and sorcerers, but I think I’d be talking to a limited set of readers. Let’s say that before UArts, I was a sorcerer, but my music education turned me into a wizard. You’ll just have to play D&D to know what that means!

Oddly, what brought me to UArts is kind of a long story. I got a bachelor’s degree in Latin from Temple University in 2013 and had a strange near-quarter life crisis at 23, where I realized I didn’t want to study dead languages. I went on a soul-searching vacation with one of my best friends, and a woman in a purple unicorn outfit convinced me that what I needed to do was study music and try to learn a disciplined art. I had always been kind of a waif. I’d float around from subject to subject in school, and, after graduation, that wandering spirit took me from job to job. I lacked goals and discipline. Music just felt like the right choice at the time. A month after that encounter, I had reached out to Mike Kennedy, the head of the guitar program at the time, and, by the time Spring 2015 was starting, I was a freshman again at 23.

Tell us about the album!

Will Made Manifest contains snapshots of my thoughts and emotions. I’m really into philosophy, the humanities, and science, so the elusive nature of time is a recurring theme. There are references to time loops and the cyclical nature of things.

Sometimes these references are metaphorical – like in “I Haven’t a Clue”, the reference to being stuck in a time loop is really about me falling for the same type of guys over and over again. The only thing I take away from the situation is that I’m in a behavioral time loop and must repeat the same mistakes.

“Time is a Strange and Mysterious Thing” is a little more direct with its references to time. The line about time being “an ouroboros as I’m pulled along by a string” references the out-of-control feeling regarding the passing of time. I turned 30 in February, and it just baffles me.

Ultimately, this album is an act of personal defiance against fate.

Did you collaborate with anyone on this album?

I’m proud to say that beyond seeking advice from University of the Arts’ own Nick Hoffman and Ellis Rovin, this album was written, performed, and recorded solely by myself in dingy motel rooms at night after working a day job that required much travel.

Ellis Rovin has helped me tremendously in the post-production process. His mixing and mastering skills helped my music’s potential shine through.

I wanted this album to be 99% me because I felt the need to prove to myself that the egregious student loans were worth it (let’s go $50,000 forgiveness!).

What was your inspiration for using the crackling can sample in “I Won’t Write Another”? Did you revolve the tune around it or did you think it fit with what was already constructed? What’s your process for incorporating sounds and samples with melodic and harmonic composition?

I really like “found percussion.” You can get the most wonderful sounds hitting the most mundane of objects together! I also happen to consume can after can of seltzer. I’m really not picky, but that particular can sample was me sliding a Mango Bubly across my desk and ripping it back. I guess sonically, I like the tension and release you get when popping open a can. It’s essentially a hiss and a pop and works perfectly in percussion. I also beat-boxed some of the drums on that track.

I see that “Will Made Manifest” isn’t a title track or song on the album. What inspired the name for the album? How does it relate to the tracks?

I’m not particularly religious, but I like to think that there is bountiful wisdom in all sorts of religious teachings. This particular idea is ancient, but I was exposed to it while learning about new age paganism and the early-to-mid 20th century Wicca movement.

The whole phrase is something like, “Magic is the will made manifest.” It is a powerful mantra for applying yourself to something and seeing it through. It also brings a sort of realism to the idea of magic because if you will something to be done – that is, if you change your personal world and the world around you, then you are effectively performing real magic, at least in accordance with the definition, “magic is the will made manifest.” This album is a manifestation of my will and, through it, I hope to further my music goals.

This album came out during the pandemic. How did you go about creating, producing, and recording it? Did you find it more or less challenging than the process during “normal” times?

I’m a bit of a control freak when it comes to my art. I enjoyed being completely in the driver’s seat for this project, though I did legitimately miss the interaction and spontaneity of live performance and recording.

Bass and guitars were recorded directly into my interface into Ableton. I used midi controllers for percussion and recorded vocals using a Sterling S50 class A FET. Many of the synth sounds were made from manipulating guitar tracks I recorded.

Overall, I found this process very freeing, and, as someone with anxiety, being able to do 200 vocal takes at 11:00 PM in a motel somewhere in upstate New York was actually an asset.

What’s your favorite track on the record and why? Is there a tune that holds a special place in your heart?

They all kind of drip with my pseudo-intellectual posturing, insecurities, vulnerabilities, faux-bravado, and sincere emotions. I feel each one is an honest look at what’s been coursing through my mind my entire life.

If I had to pick the one that means the most to me, it’s probably “I Won’t Write Another.” This song is so many things. It’s a goodbye letter to my immature self. It’s a break-up letter to all the phantoms of real men I’ve fallen in love with. It’s a bittersweet acceptance of the reality that you can love someone so intensely and they might not be capable of loving you back in the same way.

It’s an essay on unrequited love as well as a purposeful, willful statement of defiance against the cruelties of the fates. It feels good to shake your fist at an empty sky, even if you are only doing it for yourself.

The intro to “Rain Drops and Ben-Day Dots” reminds me of the syncopation in Monk’s “Evidence” and your grooves/timbres are reminiscent of some of my favorite R&B groups. Who did you take inspiration from when creating this album?

I’ve been crushing so much Monk over the pandemic! I’ve been checking out all the live recordings I can find on youtube. I didn’t make that connection, but it certainly makes sense!

I was trying to channel Philip Bailey on the falsetto section of “Time is a Strange and Mysterious Thing.” I was inspired by George Benson’s scat solos on classics like “Gimme the Night” when coming up with the melody on “Rain Drops and Ben-Day Dots.” I actually scatted the melody before coming up with the words. I love the energy and carefree feeling I get from artists like DeBarge and Wham! I love the radiant joy I get from Stevie Wonder, the rebellious attitude of Steely Dan, and the tenderness of Teddy Pendergrass. I hope at least a fraction of these feelings were channeled through my music.

You’re a UArts graduate and grad student! How has your education and time at UArts influenced your creative mind for creating original music? Do you think you’re more yourself? How have you incorporated bits and pieces of musical knowledge from people around you?

I try to be like a sponge in all things. I never want to stop learning. I try to frame myself as an eternal student – I have the loans to prove it! The faculty and my fellow students at UArts had such a diverse way of looking at the world, at looking at music, and at the art of performance. The most valuable asset I found at UArts was definitely this broad scope of perspectives, mindsets, and philosophies.

Since moving to Philly from the suburbs in 2009 as a starry-eyed semi-closeted gay white teen who was fed a steady diet of fear and Catholic guilt, I can say that my experiences at Temple and later at the University of the Arts have helped me become a better person.

Over the past 11 years, my experiences in Philadelphia have drawn my eyes beyond the monochromatism of Garnet Valley. I’ve learned so much about myself, my own biases, and my privileges. I hope I’ve grown more empathetic, more sympathetic, and better-equipped to face my own demons and the challenges ahead.

Listen to Will Made Manifest on Spotify or your preferred streaming platform!