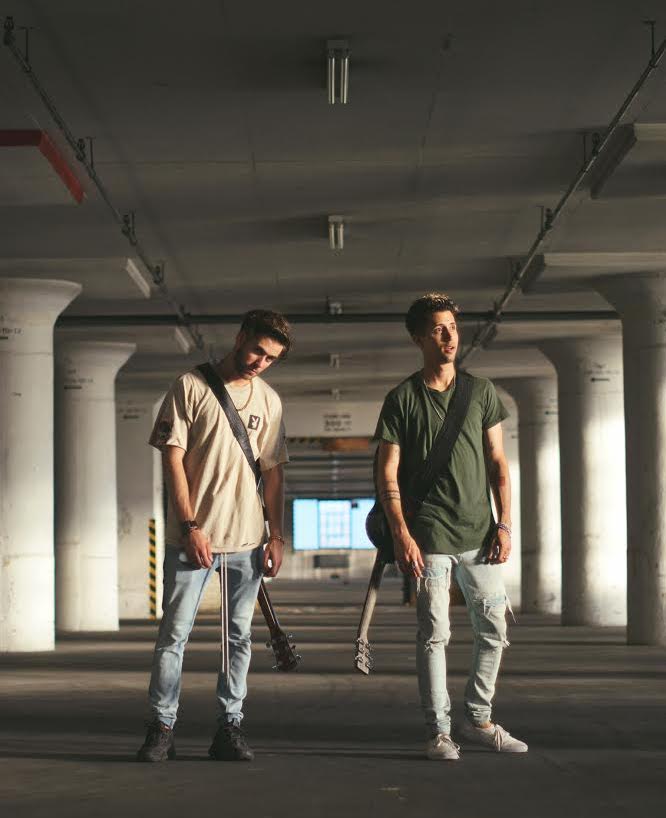 The dynamic pop duo Dom & Jesse are what you get when you combine an Italian snowboarder from Connecticut (Dom) and a Puerto Rican surfer from West Palm Beach, Florida (Jesse). Both artists, respectively, share a love for guitars and skateboards! With their boy-next-door charm and smooth pop vocals, Dom & Jesse have won over the hearts of fans through every honest, intimate, and fun performance. The pop singer/songwriter duo, now based in Philly, blends their influences of pop, alternative, rock, r&b, and hip hop music. Their influences range all the way from the original hit ’80s pop duo Hall & Oates to current popular acts of today like The 1975, Justin Bieber, Bazzi, Justin Timberlake, and Charlie Puth, all of who have created the cross-genre sounds that you also hear from Dom & Jesse’s music. Fun fact – Dom plays a left-handed guitar upside-down and Jesse plays his guitar right-handed. In other words, Dom & Jesse are two of a kind! Dom & Jesse continue to create feel-good, nostalgic, 80s pop-inspired music that brings people from various backgrounds together.

They‘ve performed their single “Dancing Alone” on the nationally syndicated “The Q Show” and garnered attention from their cover of The Jonas Brother’s “Sucker” on social media. Pre-COVID, they released “Can’t Help Myself” alongside a fun Quarantine Edition visual.

How was Dom & Jesse formed?
About three years ago, we were both solo artists. It’s funny because we actually had no idea who each other was before working together! We were introduced by our now mentors, Range and Dyshon, who came to us with the idea of creating this duo. Right away we just had this gut feeling that it might be a cool idea to try out, and we’ve literally been working together ever since. We’re still working with Dyshon and Range to this day who are a part of our production company called C.R.E.W., so big shout out to them!

Which contemporary artist has had the most impact on Dom & Jesse?
Newer artists like Ed Sheeran, Shawn Mendes, and Justin Bieber have definitely been huge influences on us and also helped to inspire us to chase our own dreams. Other artists to mention though are John Mayer, Justin Timberlake, the Jonas Brothers, and of course Philly’s own duo, Hall & Oates!

How has the city of Philadelphia influenced your music?
One of the main reasons this duo is even a thing is because we moved to Philly from Connecticut (Dom) and Florida (Jesse). Dom actually graduated from UArts! We met everyone in C.R.E.W. here in the city, and ever since then it’s been like family, and Philly has become another home for us. There’s a long list of amazing people we work with here. Incredible producers like Dilemma, Yount, and Kris Kargo just to name a few. Extremely talented writers like Aaron Camper, Maddi St. John, and the rest of the guys in C.R.E.W. have been crucial to our writing process and helped shape these songs we’re releasing. Being around so many talented people here has forced us to level up in ways we never thought we could. We wouldn’t be Dom & Jesse without the incredible team we have in Philadelphia, so big love and props to all of them!

How is the band adapting to the pandemic?
We can’t say it’s been easy. Everyone is certainly struggling through this pandemic. It’s something the world has literally never seen before, but the entertainment industry especially has been really impacted. Last year, we had around 200 gigs under our belts collectively, but this year we probably had around 20. Now we are just finding new ways to work and be able to maintain full-time music careers. During quarantine, we learned how to design and create our own merch. We are actually about to open our online merch store, so keep an eye out for that on domandjesse.com! Besides that, we have been releasing new music like our latest single “Won’t Waste My Time” with the team that we are stoked for! Even though this pandemic has been weird and unpredictable, it’s given us lots of time to plan out new things, and we’re grateful for that.

Where can we follow and support your music?
@Domandjesse across the board. We have a dope website, domandjesse.com, where you can find all of our music, videos, merch, future shows (whenever that happens again), and all links to follow us!