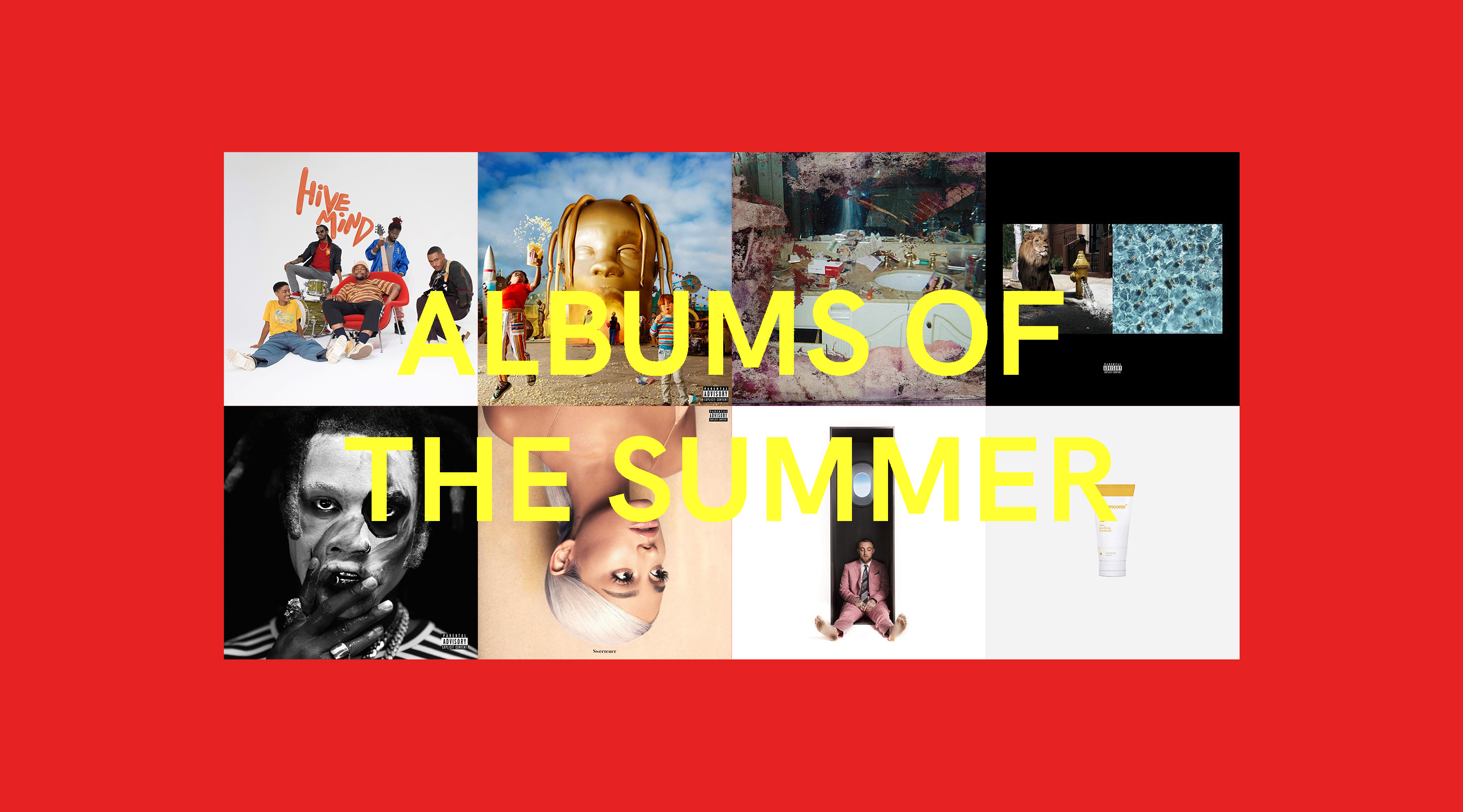 2018 has been a prolific year for music as a whole, and the sheer amount of releases makes it tough to even establish what albums are worthwhile, let alone which rise to the top.  These are my personal top picks (in no particular order) based on a summer of constant listening.

Once a disjointed collective, funk band and cult favorite The Internet returned from their hiatus with a cohesive body of work.  The individual members’ eclectic and diverse visions, often a roadblock for the band’s success, instead overlapped pleasantly to create a consistently pleasant vibe with a retro aesthetic.  Perhaps the best decision made during the creation of Hive Mind was the maintenance of balance: previous projects had been held back by the quirky soundscapes of producer Matt Martians or the longform songwriting of lead vocalist Syd.  Simply put, this album evokes the love and harmony between band members, and that unencumbered positivity infects wherever it’s played like a smile.

Ariana Grande needed no change of direction.  The production-songwriting team for her last two studio albums, helmed by Swedish pop heavyweight Max Martin, led her to consecutive charting albums at #1 and #2 respectively.  Her pivot towards Pharrell Williams for primary production on Sweetener was met with backlash from her core fanbase, with some fans organizing a boycott of the new album.  Regardless, the switch was a musical stroke of genius.  Pharrell and Ariana are the only two credited writers on the majority of songs here, and the intimate collaborations bring the popstar towards Pharrell’s off-kilter sensibilities, ultimately forming an effective and new pop-R&B fusion where some songs even sound like mainstream Brainfeeder instrumentals.  An impressive outing from a traditionally safe artist.

Cocaine.  No other rapper has ever made a successful decades-long career around finding creative ways to speak about moving kilos.  Public and proud kingpin, label president, sneaker figurehead.  Pusha T has been one-of-a-kind for his entire run.  His only weakness was album mode; Push could always make a song hot but his solo outings were lackluster by comparison.  Daytona changed that.  Short and sweet at seven Kanye-produced tracks and 21 minutes total runtime, this album exemplifies his image and legacy.  Drug slang followed by a condescending refrain of “If you know, you know” on one song, brags about bottle servers racing to his table on the next.  Hip-hop as pure as the white.

This album was teased since 2015, the same year as Travis Scott’s critically acclaimed debut Rodeo.  Named after a defunct Houston amusement park, the album was hinted at for multiple years and album cycles to come, until its title became the fans’ cry to the heavens on social media.  As Scott’s music turned more pop release after release, his diehard supporters held out.  The resounding sentiment: “He’ll come back on Astroworld, just wait”.  How right they were. Embodying its rollercoaster namesake, this album’s number one priority remains true: the ride.  Collaborators, Tame Impala, Sheck Wes, The Weeknd, Frank Ocean, enter and exit.  Sonics slither against each other, acoustic guitar rolling into walls of synthesizers.  Travis stays in the spotlight all the while, shifting effortlessly from rage to moodiness, from luxury to love.

Denzel Curry is the OG when it comes to Soundcloud rap.  His angry Florida style pioneered the wave of rabid belligerence popularized by rappers like the late XXXTentacion (who Curry let stay at his house rent-free for over a year) and producers like Ronny J (whose breakout hit was Curry’s rager turned meme soundtrack “Ultimate”).  His new album Ta13oo is more introspective than angry, touching on the way hip-hop culture treats depression before dropping into a full-on screamo-rap posse cut with newcomers JPEGMAFIA and Zillakami.  The variance of ideas, both lyrically and sonically, proves Denzel’s ability beyond inspiring a generation of young troubled supernova stars: he’s a good father too.

Sixers made the playoffs.  Nova won.  Birds won against the Patriots.    Meek free.  When the Eagles won last season, I could hear “Dreams vs. Nightmares” blasting from City Hall all the way down to my dorm on Pine.  Meek got on a chopper from prison to Wells Fargo, rang the bell, and watched the Sixers beat Miami by 13 in game 5 to move on.  My hometown, two towns down from Villanova, had police lines after a car flipped and bushes were set on fire.  An SUV swerved across lanes by my house playing “Litty” at full volume.  Legends of the Summer is Meek showing his gratitude for his city.  Swizz Beatz screams “It’s Meek time!” on the intro, but Philadelphia knows.  It will always be Meek time.

But seriously, the music’s good.

Stream Legends of the Summer here:

The debut commercial release from electronic artist (and member of rising Soundcloud collective six impala) Underscores combines modern pop sensibilities with new production choices.  For every melodic hook into rhythmic drop (a formula Underscores revamps with his own unique blend of sonic textures), an autotune-vocoded acapella harmony takes center stage in a bridge, or the traditional pop structure degrades altogether to make room for a sampled drum break which in turn fades into grainy audio of an old performance from the artist himself.  The frenetic nature of skin purifying treatment coupled with its subtle yet intriguing lyrical themes makes it a promising release while heralding the creativity coming from six impala’s members going forward.

It’s impossible to speak about Swimming without the tragedy of Mac Miller’s passing earlier this month.  However, his last studio release is one of his best and most cohesive, collecting Miller’s influences and experiences under one bittersweet theme.  This was his first project without featured peers, and throughout, his vision stays true and clear, only enhanced by guest instrumentalists or vocalists without straying from the path.  A record for the ages.  Rest in Peace.