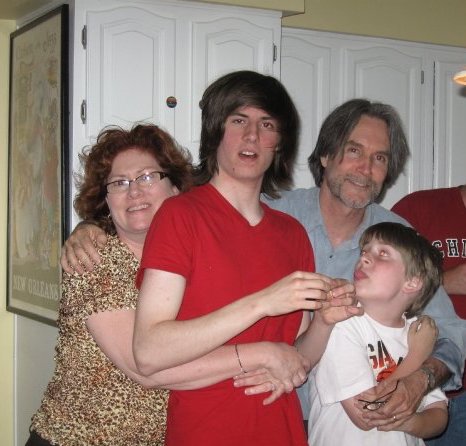 My Brother and My Taste

In kindergarten, I loved Britney Spears.  My parents bought me the deluxe edition of Oops!…I Did It Again for Christmas, and it was all I listened to for two months straight, mostly because it was the only CD that was actually mine, and the only other options were two Tears for Fears records that my dad let me borrow.  Unfortunately for me, I had to share a room with my brother Ian, who had a completely different taste in music from five-year-old me. If I was listening to Britney Spears, I was going in the basement where I wasn’t driving him insane.  The age gap between me and my two brothers is significant, being seven and eleven years apart respectively from them made it difficult to connect with them in ways that they were connecting with each other.

When my oldest brother moved away to Chicago, Ian and I were left to figure out how to get along with each other without a real mediator.  It wasn’t until I was in the car with my mom and Ian and he started playing a mix CD he had made that I got a taste. Most of it I wasn’t really interested in, but then “Killer Queen” by Queen came on, and I was transported to a world of vocal perfection that I hadn’t experienced before. It was at this moment that I decided I wanted more music from my brother, and not only did it light a spark in our relationship as siblings, it also introduced me to some of my favorite artists ever.

My brother started showing me music in second grade. When he wasn’t trying to scare me by throwing rocks at my windows or shoving my face in his armpit, he was driving me home from summer camp and showing me new music to listen to. He started by showing me artists like Queen, Stevie Wonder, The Beatles, and Weezer. It was also around this time when I got my first taste of rap music, after stealing my brother’s iPod Nano and taking it to class. I hid out in the bathroom for almost an hour listening to N.W.A.’s Straight Outta Compton. Of course my brother and parents were furious since I wasn’t allowed to listen to rap music, and I wouldn’t develop a taste for rap until my brother would show me another artist later in my life.

By the time I was in fourth grade, my brother’s emo phase hit and along with that came new music to listen to. Driving home from summer camp, we would listen to My Chemical Romance, Taking Back Sunday, Circa Survive, and of course, more Weezer. Along with these bands, he also showed me some of my favorite bands that I never would have found by myself: The Dear Hunter, A Great Big Pile of Leaves, Audio Karate, Jawbox, Trophy Scars, and many more, all of these bands ranging between indie/alternative, noise rock, and punk. While I definitely had a love for music at the time, I never really took it upon myself to go looking for new music, instead opting to make home videos or play video games, so having my brother around to be my personal music nerd helped me develop new music tastes and understand that all music is different and beautiful in its own way. Of course, by the time I had learned how to use the internet, my brother showed me Bandcamp and Sputnikmusic and by that point I’d already gone down the rabbit hole of alternative music. However, Ian still wasn’t done showing me music I would go on to love for the rest of my life.

In fifth grade, I was sent to a boarding school and every weekend Ian would drive to the school to pick me up and take me home. During these hour and a half long car rides, I spent most of my time playing games on my DS while the sounds of noise rock and post punk ravaged my eardrums. Towards the end of my boarding school career in eighth grade, my brother showed me the first rap album I would ever truly love, Ready to Die by Notorious B.I.G., and it was a moment that would change my listening tendencies forever. Growing up, I could never really appreciate rap music because my parents denounced it so much when I was younger, and the school I was attending didn’t allow explicit music. But lucky for me, I had an iPod that no one ever checked for music like that, and I was entranced by tracks like “Things Done Changed” and “Machine Gun Funk”. It was a whole new world of music that I hadn’t even begun to dive into, and once again it was all thanks to my brother and his erratic music taste.

Once it was time to begin high school, I’d already had the tools necessary to dive into my own music tastes and ideas. But without Ian, I wouldn’t have such a deep love for music like I do now. I didn’t have the drive to find music that I loved and instead got along just by listening to what I’d been used to. One day Ian played something I really didn’t like, and I proceeded to mock him and his music taste being the annoying younger brother I am, but his response has always stuck with me. “There’s no such thing as bad music, only music you don’t like.” Of course, this statement is totally incorrect, as there is such a thing as DJ Khaled, but what I took from it was that there’s always something new to listen to, and it’s always important to be respectful of others’ music tastes. Maybe you don’t like it or you think it sucks, but it might be someone else’s favorite record.

The important thing to take away from this rant is that you should take the time out of your day to show your siblings or your cousin some new music. You never know how much that might affect them in the long run.