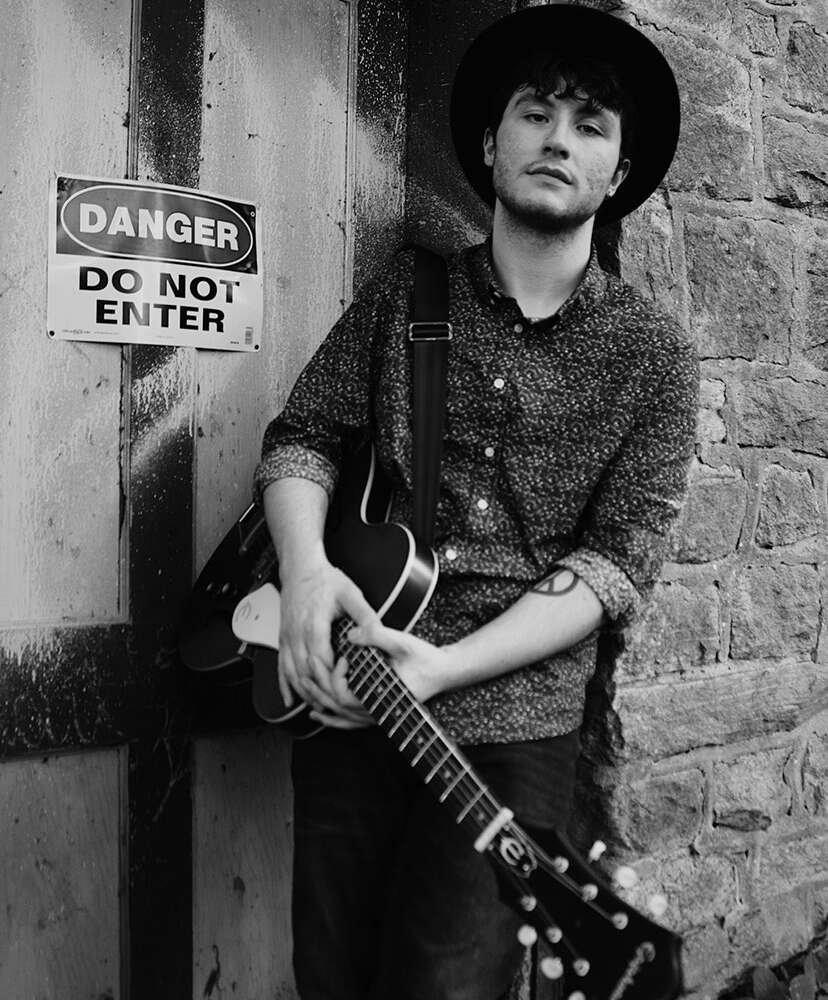 On April 16, 2021, Jackson Vincent released his debut EP Foxtrot. He used this album as an outlet for negative emotions and personal experiences, and those feelings are forever embedded in each song. Foxtrot is filled with somber melodies, deep guitar riffs, and raw emotion. Each song has its own message, its own struggle, that Vincent is trying to portray.

Vincent is a photography major at the University of the Arts but has always had a passion for music. He would describe his sound as “Experimental Indie Folk” and for fans of Bon Iver, Giles Corey, Hozier, and Nirvana. “Music for ghosts” is a term he coined for a new style of music that combines the genres of folk, grunge, alternative and lo-fi. It features earthy, ethereal, distorted, and raspy elements and can get dark at times while still maintaining a vibey nature. Or, in simpler terms, “a moody tune that would play as a ghost drifts across planes.”

This interview focuses on his musical journey, what led up to the creation of Foxtrot, and what we can expect from him in the future.

Q. What first got you into music? Did anyone in particular inspire you?

I was obsessed with Green Day as a kid. Billie Joe definitely got me playing guitar when I was little. I thought punk music was the coolest thing ever. I used to just spend hours watching him play and I’d steal whatever I could from him. I’ve grown a lot as a guitarist since then, but there’s always going to be things I learned from his playing that stick around.

Q. As you’ve grown as a musician, have any other artists helped form your current technique?

Bon Iver is a big one. Justin Vernon is everything I could aspire to be as a musician. His music helped me find my voice. The heavy autotune experimentation and occasional higher register came from him. He’s like the god of indie folk music. I’ve also really learned a lot from an artist called Giles Corey. That project really shows where music for ghosts came from. There’s so many ethereal qualities to the Giles Corey tracks, the best way to put it is haunting. I didn’t pick up on it until people started to point it out, but maybe there’s a little Nirvana influence too. Kurt’s singing style and his fuzz-driven guitars definitely fit in with my current music.

Q. Since we’re celebrating the one year anniversary of your EP Foxtrot, do you want to walk me through your creative process for that? I definitely hear a lot more of the experimental sound you mentioned in it.

Foxtrot was a crazy time. My personal life was getting hectic, my relationship at the time was getting rough, and I felt like no one was really listening to what I had to say. I locked myself away and just poured my heart out into that record. The opening riff to Foxtrot was a little something I’d played around with for years just as a fun little thing. Everything else was written and recorded over the course of a few weeks in the living room of my parents’ home. I was frustrated and down and just needed to let the words out.

The songs all came to me pretty fast. I’d stay up all night some days just recording take after take of these songs to get my emotion out. Once I felt too tired to continue, I knew I’d said what I needed to say. I credit Foxtrot with defining music for ghosts and my whole sound as a whole, so before it was released Jackson Vincent didn’t really have a steady path yet. It gave me a lot of freedom to just do whatever I wanted. I was alone in a room with no one listening, so it was really therapeutic. I played all the instruments and everything myself. I even mixed it and everything. At the time it was just a way for me to vent what I had in my head. Once I had these songs sitting there I looked at it and was like “Wow, this is a cohesive record.” So I put some together, cleaned them up a little, and there it was.

Q. Do you feel like you successfully put out the message you were trying to convey? Or looking back on it now, is there anything you would change?

I think it’s perfect as it is. It said what it needed to say. People don’t always pick up on it, but there’s a narrative in there. Foxtrot and Running on Empty are hopeless and hurting. It is a reconciliation. It was the narrative I needed at the time. Even the grittiness and imperfections in there have their place. It’s a very rough record about a very rough time. It made perfect sense when it needed to. Now it’ll forever exist as a testament to what once was. I wouldn’t want to change that.

It’s so hard to pick a favorite now. All five have a special place in my heart. At the time, “It Is” was my favorite. Oddly enough, that’s the only song off the EP that’s never been played live yet. It still hurts too much to do that one. Even recording it was a struggle. But I still think it’s a beautiful one. Running on Empty has become my favorite to play live though. People really seem to dig that one. It gets the loudest reactions and the most people singing along, which is always nice.

Q. Do you have a favorite lyric?

“I’m drowning in a sea that sways inside of me.” I always sing that one the loudest.

That’s the whole concept. That’s what the record is surrounding, that was my life at the time. I’m being overcome by problems that only exist to me. The thing that is bringing me down the most only exists inside of me. It’s as true now as it was the day I wrote it.

Q. What can we expect to hear from you in the future?

I’ve recently signed to a local label and we’re working on some big things. I wouldn’t see the next project as “Foxtrot 2,” but it’s very much a reasonable step forward. It makes sense, like it’s not a total deviation from the last one but it’s also not identical. It’s fresh, but very much still music for ghosts. New music will be arriving in the very near future. This is only the beginning!

Q. One last question: Why did you decide to major in photography over music?

I have a passion for both arts. I like being closely guided in photography. There’s a lot that I enjoy about learning directly from a professional. Music is more of an outlet for me. Like with Foxtrot, I use it to release what’s going on in my head. That being said, I enjoy just figuring it out on my own as I go. I never liked having music teachers or anything. I like just sitting alone and figuring things out. That watching and repeating cycle is how I started out, I never wanted to change that. I learned guitar by watching hours of Green Day videos and things like that and I had fun every second of the way. That process keeps it interesting to me and I feel like it made it much easier to create my own style. Music for ghosts exists because I’m not a trained musician. And I know that’s not for everyone. Am I a good singer or a pro guitarist? Absolutely not. But I’m saying what I need to say, and the people who care enough to listen are the ones I play for.

He’s also playing a live show at The Pharmacy in Philadelphia on May 14th. Details can be found here.
Photos by Alina Ortiz