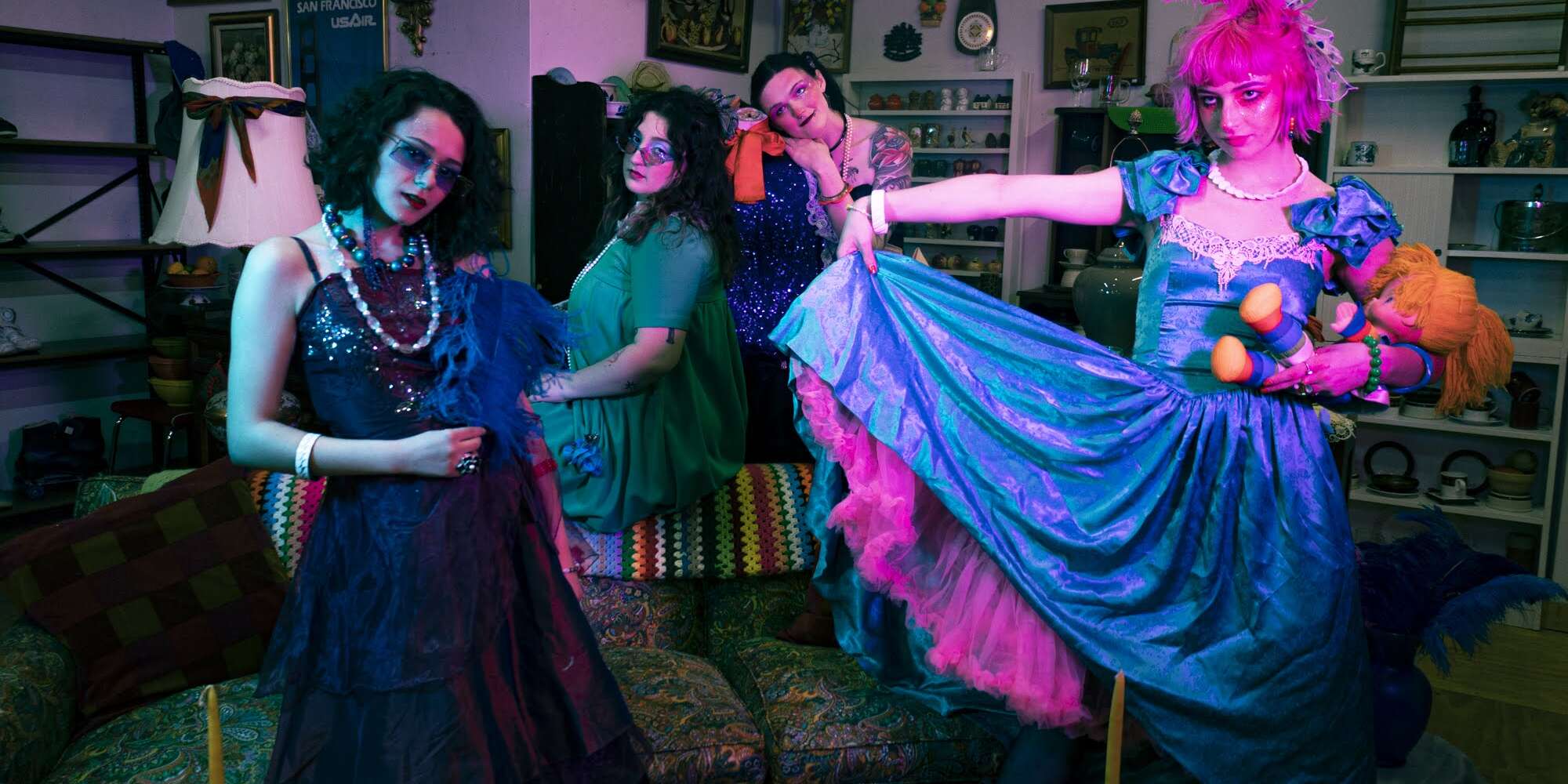 Gloss Just Wants To Have Fun

An interview by Isaac Finn

Gloss is a lot of fun. They are filled with joy. Even after long hours in the studio, they can constantly make each other, and themselves, laugh. They are always themselves, never shielding their true personalities. The Philly-based pop fusion band consisting of Sophia on vocals and keyboard, Mollie on drums, Bella on bass, and Corinne on guitar are part of a reinvigorated and vibrant Philly indie scene. Gloss is pure vibes.

Gloss’ knowledge of music theory lends itself well to sonic experimentation. Mollie talks about how theory impacts the way she writes: “We do know music theory, but while they’re trying to fix a chord progression by being like ‘oh like what does it want to go to?’ I’m like, ‘do the opposite of what it wants to do’.” Gloss doesn’t worry about how something should sound. If it sounds good, even while not being ‘correct’, why force it. Sophia talks about this idea when she comes in with new songs: “It’ll be like this is wrong technically, but why does it not sound wrong. And I’m like ‘I have no idea’, but it makes it more fun.” Just because a chord wants to go someplace doesn’t always mean it should. Gloss’ upcoming release focuses on blurring the line between consonance and dissonance.

Gloss has been playing shows every weekend, all across Philadelphia, including a set at PhilaMOCA last month. The weekend of their PhilaMOCA show, Gloss also drove to Boston to play a house there too. But, towering above all other diy venues is one: “The Palace,” exclaim the band in unison as Bella adds, “They’re just so welcoming and professional. The Palace has a special place in our hearts.” Gloss played at the Palace, a diy venue in South Philly, on Halloween 2021. They continue to support the venue and the bands that play there by attending the Palace’s other shows, rushing over even on nights where they performed at another venue.

Gloss talked about the joys of performing live, especially during their Palace performance: “People are just into it. I think that’s what really makes it special, when people are just dancing around getting all sweaty. I love feeling sweaty after a show,” explains Bella. Gloss brings their pure energy on stage with them for each performance. Having seen them live multiple times, I can say that their passion for music comes across brilliantly. It is this joy and energy that gets the audience involved in the music, and a major way that Gloss has been able to grow a local following.

This love of performing has inspired aspects of Gloss’ next release. Corinne talks about incorporating fun audience moments into the EP: “We’re trying to take inspiration from how people are going to react when we play things live.” Gloss leaves room on their upcoming songs where they can have added fun during shows. An upcoming song, for example, features a vamp section where members of Gloss can angrily rant about their problems. Their upcoming EP is heavily influenced by the joy they feel playing live.

On stage, Gloss isn’t a persona. They are always trying to be themselves: “I think you can tell when someone’s being fake on stage and it never comes across as genuine. So why would you do it?” Sophia questions why people aren’t their true selves on stage. She always looks like she’s ‘ready to perform’ because the Sophia on stage is the same Sophia working her job at Repo records. She adds:“If it was an act you’d be able to tell.” Gloss strives to be who they are, both on stage and on social media. They don’t take themselves too seriously, that’s what they strive to show. Their genuine personalities allow listeners to attach themselves and more closely relate to their music. Gloss isn’t an act.

Gloss’ upcoming EP is more carefully crafted than the last. “I think it’s more involved, than the last EP for sure, with what the synth’s doing and background parts in general,” Bella said about recording their latest single. Mollie added, “We also just have more control because this time we’re actually recording together.” Gloss recorded their last EP virtually, sending tracks to one another during lockdown. This time, though, they were able to spend time with one another in the studio. They can be more careful with background harmonies and control what each instrument is doing in each song.

Gloss just wants to have fun.